John Matthias’ much-anticipated latest album is out today on the Village Green label. ‘Geisterfahrer’ is an album that includes a mixture of material: new works written and performed by John Matthias and Andrew Prior for the new dance-theatre work, ‘Eden’; as well as being partly recorded at a 600 year-old school in Ashburton, Devon, with the unique and fantastic acoustic of this space being reproduced onto all of the other tracks on the album by producers, Simon Honywill and Jay Auborn.

The thirteen stunning tracks were recorded in two sessions with John Matthias performing on piano, violin and guitar, with all of his vocal performances being recorded live alongside the guitar parts. The sounds of the album feature minimalist piano and violin melodies that are innovatively interspersed with sounds created by firing artificial neurons using the ‘Neurogranular Sampler’, an instrument which John Matthias has developed at Plymouth University with Jane Grant, Tim Hodgson, Nick Ryan, Kin Design and Eduardo Miranda over the last 5 years.

John Matthias is a musician, composer and physicist. In 2008, he won the PRS Foundation New Music Award (The ‘Turner Prize’ for music) with Jane Grant and Nick Ryan for the development of a huge sonic installation across the UK entitled ‘The Fragmented Orchestra’. He has previously released three albums; ‘Smalltown, Shining’ (Accidental Records 2001), ‘Stories from the Watercooler’ (Ninja Tune 2008), ‘Cortical Songs’ (Nonclassical 2008) with Nick Ryan, which includes remixes by Thom Yorke, Simon Tong and Jem Finer and was listed as one of the top ten classical albums by Time Out (Chicago) in 2009. John is Associate Professor in Sonic Arts at Plymouth University and is co-director of the Art and Sound research group in the School of Art and Media. He recently performed the album in Plymouth at the Peninsula Arts Contemporary Music Festival ‘Thinking Music’ and his performance is shown in the image below. As well as performing it on BBC Radio 3 on the 3rd of February.

Purchase the album here today, it is released physically and on Vinyl next week, on the 24th February. 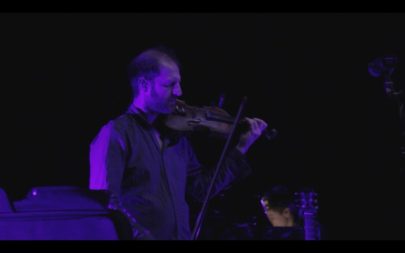