We can’t all be Mozart – but we can still play

From Caracas to Sterling, the evidence that music can transform lives is utterly overwhelming.

The Hallé’s new orchestra centre, Opera North’s ongoing Ring cycle, the Philharmonia’s digital programme, and international work to be based at The Sage, Gateshead, are among projects to benefit from Arts Council England’s ‘Catalyst’ funding.

Choirmaster and television presenter Gareth Malone will return to television later this year with a new six-part series featuring choirs in the workplace.

Angela Gheorghiu and Roberto Alagna: the Liz Taylor and Richard Burton of opera

For anything is possible when it comes to opera’s golden couple. Their romance off-stage has mirrored the operas they headline around the world.

Gerhard Mantel, author of ‘Cello Technique – Principles and Forms of Movement’ and professor at the Frankfurt Hochschule, has died aged 82.

The UK summer is now in full swing – complete with its traditional rain and tepid temperatures – but the King’s Singers Foundation is asking British composers to cast their thoughts forward to the Christmas season.

The prince is in disguise, there’s no fairy godmother and not even a glass slipper, but Rossini’s take on the Cinderella story offers sparkles, star turns and a great storm scene. 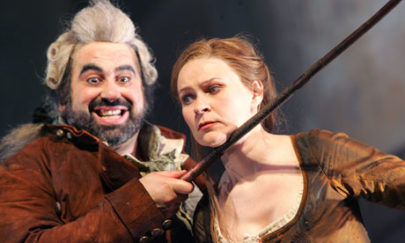