The Classic BRIT Award for International Artist of the Year will go to Chinese pianist Lang Lang, it has been announced. Les Misérables stars Samantha Barks and Alfie Boe will also perform at the ceremony on October 2nd

A New York orchestra pitched up on a street corner and simply put a sign up saying ‘Conduct Us’, and then filmed the results

My vision of Beethoven’s Fidelio

You won’t recognise the words, and you certainly won’t be expecting to see a string quartet suspended in cages, but my take on Fidelio is true to Beethoven’s spirit, writes Calixto Bieito

Is jazz good for babies?

When jazz musician Michael Janisch had his first child, he put the theories to the test with a specially recorded album

Nazi gold: does a music score hold the key to buried treasure?

Wimp to offer unlimited music in Thon hotels and restaurants

Owned by the Olav Thon Group, Thon Hotels will use WiMP strategically with different music profiles in various locations, such as the Thon Hotel Opera which has a dedicated classical music profile

Deadline extended for PRWeek ’30 under 30′ entries 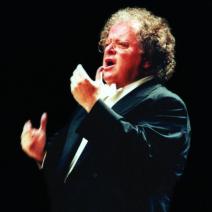