The London 2012 Festival: The greatest show of a great year

It is about to happen all over the UK. It brings existing celebrations like the Proms together with one-off spectaculars on the Thames and in Edinburgh, and street dance everywhere, in a programme of 12,000 events.

Radio 3 presenter hurt in fall after detention by immigration officials at the end of a children’s concert.

The National Audit Office has picked up on some unorthodox accounting by Arts Council England in the shape of a move devised to prevent ACE having to give cash back to the government at the end of the financial year.

The leaders of the American Composers Orchestra look to the ensemble’s future.

The Sunday Conversation: Pianist Mona Golabek holds on to the music

The creator of the one-woman show ‘The Pianist of Willesden Lane’, now at the Geffen Playhouse, reflects on the gift of music.

Soprano sisters Sophie and Mary Bevan are sharing an opera stage for the first time.

The power of laughter

Comedy is, notoriously, the hardest genre of all at which to succeed – and probably why it doesn’t get into music very often.

YouTube sensation to record her London concert debut for the label. 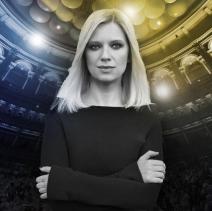