As there are so many fantastic concerts, venues and opportunities to hear live music throughout London, we thought we should let YOU know where they are all occurring. This week is a ‘last-minute’ special, featuring events that are occurring within the next few immediate weeks.

The internationally renowned cellist Natalie Clein takes classical music to a Rock and Roll setting in the dynamic 100 Club.  A variety of artists have performed here in the club’s fifty year history, from The Sex Pistols to Oasis; now it is classical music’s turn!  Natalie is joined by The Sabina Rackcheyeva Ensemble: an improvisatory group of musicians who fuse elements of Western and Eastern musical together to create a captivating artistic hybrid.  Tickets are available for £10/£8 online and £12/£10 on the door.

Where? Ray’s Jazz at Foyles, W2CH 0BE

As part of the London Jazz Festival, Trish Clowes is performing on the first night of the 2 week festival for FREE at the café in Foyles. Being a young, fresh musician, she will be leading her dynamic ensemble through richly harmonic originals, as featured in her latest Basho album. It’s a lovely intimate venue with a relaxed, laid back feel and as it’s free it may be busy, so make sure you come down early!

The LPO under Kazushi Ono play a luscious programme of late nineteenth century and early twentieth century works: Richard Strauss’ sublime Death and Transfiguation, Mahler’s Rückert-Lieder with contralto Nathalie Stutzmann, and Ravel’s Suites Nos. 1 and 2 from Daphnis et Chloé. After this concert members can enjoy a free drink courtesy of Heineken, all for only £8.00! Tickets can be ordered by calling 020 7840 4242 and quoting ‘Noise Under 26’.

Shakespeare’s tragedy of doomed young love receives a wonderful interpretation in Gounod’s opera. It combines all the drama of the well-known story and the emotional and stirring music typical of the composer of Faust. Not presented by The Royal Opera for a decade, Nicolas Joël’s production is revived with a fantastic cast conducted by French specialist Daniel Oren, and that has Piotr Beczala and Nino Machaidze/María Alejandres as the star-crossed lovers. There are cheap £10 student tickets for some of these performances and the WildKat team are all heading down to see this one for ourselves! 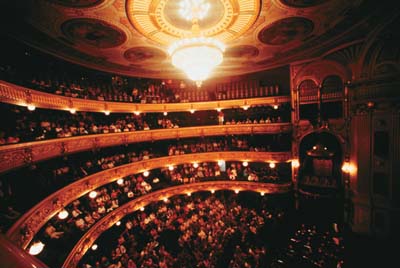