5th June: Emotional moments from One Love Manchester concert, Mozart piano concertos begin at The Cliburn, and Sgt Pepper back in the charts

In today’s news many comment on the emotional One Love Manchester concert that took place last night, two weeks after the terror attack at Ariana Grande’s concert. The Beatles’ Sgt Pepper’s Lonely Hearts Club Band is back at the top of the charts for the first time in 50 years, and The New York Times looks at the best moments in classical music last week.

One Love Manchester: The most emotional moments

There were high emotions at a benefit concert staged by Ariana Grande in Manchester less than two weeks after the terror attack following her gig in the city. But the show also demonstrated the power of pop music to bring people together

Sir Jeffrey, who was born with spina bifida, was the principal conductor of the English Chamber Orchestra and the Royal Opera House in the 1980s

Manchester One Love: Police dance with members of crowd at tribute concert

In addition to reviews, features and news during the week, our critics and reporters collect the best of what they’ve heard: notes that sent shivers down their spines, memorable voices, quotations that cut to the heart of the story

There is so much new life and affluence crowding the Brooklyn waterfront that traditionalists like Mark Peskanov, the master violinist who runs the Bargemusic concerts of chamber music aboard a handsomely converted coal barge, hard by the Brooklyn Bridge, might be tempted to move. Which he has no intention of doing

Starting Saturday, the semifinal round of the Van Cliburn International Piano Competition switched to a half-and-half format each day: two solo recitals each afternoon, four performances of Mozart piano concertos each evening, with Nicholas McGegan conducting the Fort Worth Symphony Orchestra

It is with deep regret that French baritone Ludovic Tézier will no longer be making his role debut as Iago in Otello on 21, 24 and 28 June, and on 2, 6 and 10 July

Sgt Pepper’s Lonely Hearts Club Band back at number one

Can listening to nature improve how we listen to music?

The TLS‏ @TheTLS: “It is striking how Mancunians have turned to poetry and music” http://bit.ly/2qPpBhh 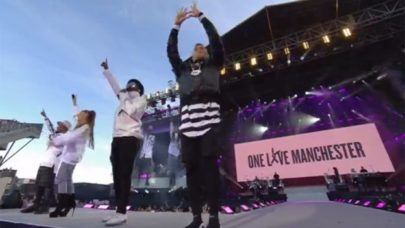 Where Is The Love? – Black Eyed Peas and Ariana Grande. Photo: BBC News