The latest in Ivan Hewett’s 50-part series on short works by the world’s greatest composers.

Real singers combine with two dimensions of film to make Sunken Garden. Its makers explain it all to Emma Pomfret.

Born in Russia, but rigorously trained in Germany from early childhood: a surprisingly large number of piano stars have emerged via this route, with 26-year-old Igor Levit prominent among them.

iPad city… how the Apple tablet is powering London

From barmen to doctors, Apple’s tablet is being used as a working tool rather than just another tech vice. Andrew Liddle and Susannah Butter look at how London has become powered by the pad.

Share your memories of the Royal Festival Hall organ

Southbank Centre launches appeal for recollections of historic instrument in honour of its reinstallation next year.

Whether Welser-Most will be able to conduct in Cleveland the last two weeks of April, as scheduled, remains uncertain. 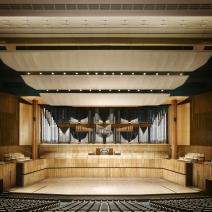