This weekend WildKat PR fled the city and headed to Cornbury Park, the 800-year-old, 1,700-acre Oxfordshire deer park and setting for Wilderness Festival. The Festival is renowned for its gastronomic delights as much as the eclectic musical line-up, this year featuring headline artists from Burt Bacharach to London Grammar. 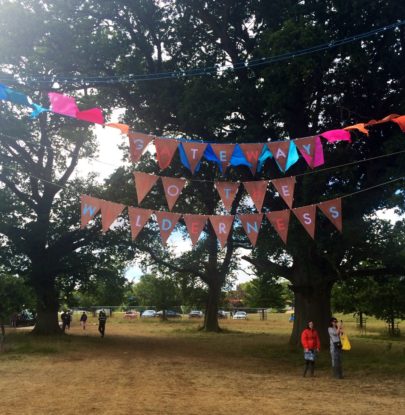 This was our third time at Wilderness Festival with three of our clients – both current and upcoming – performing over the course of the weekend. Silent Opera staged their latest production Live/Revive/Lament on Saturday evening on the Wilderness Stage. Silent Opera premiered the full production at Aldeburgh Music this Summer and have since performed at Kensington’s Saatchi Gallery as part of the InTransit Festival. In addition, eccentric cellist Gabi Swallow performed with her urban family at the Wilderness Stage on Friday 8th August 2014. Donned with appropriate festival headpieces and striking make-up, Gabi and her urban family performed a range of contemporary and classical music, which included Vivaldi’s Summer and a little Piazolla.

Gabi Swallow and Her Urban Family

Another treat for the WildKat PR team was newcomer Poppy Ackroyd who also took to the Wilderness Stage on Friday afternoon. Despite the rain, a huge crowd assembled on the bales of hay for her set, where she performed her own compositions on the violin and keyboard, accompanied by some unique visuals.

The British, bunting-clad, boutique festival was idyllic, and we have carefully stowed our wellington boots and feather headdresses until next year…