We are very excited to be working with guitarist Maria Camahort. Having completed her musical studies in Barcelona and at the Guildhall School of Music and Drama in London, Maria Camahort is now a regular on the performance scene the world over. She has performed in many important musical cities such as Madrid, London, St Petersburg, Warsaw and Kraków. Maria was also the recipient of the prestigious Guildhall Artist Fellowship 2010-2012, and, together with flautist Lucy Driver, was the winner of the Pro-Musicis France Award 2013.

Influenced by the likes of David Dolan, Zoran Dukic and John Parricelli, Maria has a specialist interest in chamber music and enjoys collaborating with other performers from other genres in creative ways. To date, she has worked with singers (The Voice of Strings), dancers (Tango Magnètic), jazz artists (Jamie McCredie) and musicals (The L5Y). She also appeared in a CNN interview with Formula 1 driver Fernando Alonso in June 2012.

Her latest project continues this theme; The Maria Camahort Quintet was born in November 2011 out of the desire to increase the possibilities in chamber music. Maria plays the guitar and arranges the repertoire alongside four other talented musicians: Violeta García, voice and violin; Laura Ruhí-Vidal, soprano; Sergio Serra, cello; Pablo Domínguez, percussion and guitar. The Quintet has already performed at some of the top venues and festivals such as Kings Place and the Purcell Room. They are currently focusing on the Spanish musical tradition and this exploration has culminated in their first album, due to be released in June 2015. Entitled ‘Iberian Colours,’ the CD will be a representation of the vibrancy of Spain in sound: vibrant colours, earthy textures and foot-tapping rhythms. The Quintet will also be performing at the Buxton Festival and Arts in Action festival, both in July, and at the Barbican’s Milton Court in October.

Look out for ‘Maria Camahort Quintet: Iberian Colours’ on Convivium Records, digitally on iTunes, Amazon Music, Spotify and physically by Harmonia Mundi UK, released on 1st June 2015. Keep up to-date with Maria, the Quintet and the album on her website and through Twitter. 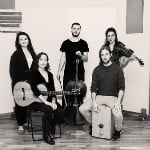