‘Your Call…’ is calling on WildKat PR!

‘Your Call…’ is a new music theatre work that explores our relationship with the digital realm and how it intimately, and increasingly disruptively, intersects with our lives. Using both live and synthetic voices, the opera follows the online identity of the single character, called The Woman. The voices on the other end of her phone seem different to normal; they seem to know things about her that she has not told them. Yet they are all competing for her attention in contradictory ways. Can The Woman, sung in dual iterations by Mezzo Sopranos Lisa J. Coates and Hai-Ting Chinn, work out what is going?

The opera was created and written by Kevin Jones who was inspired by his work as part of the CreST (Creative Speech Technology) Network: a research project at the University of York. Experts and practitioners from the scientific and artistic fields, all with a particular interest in the voice, began to explore the intersections between the two disciplines. The goal was the build a common language using voice technology. ‘Articulate’ was the result of this collaboration and was the first ever concert to feature live and synthetic voices. It was here, at the same concert in 2013 at the Woodend Gallery in Scarborough, that the first snippets of ‘Your Call…’ were heard.

The complete work, with choreography by Joy Kellman, will have its premiere at Tête à Tête later this year, having been extensively developed since its inaugural performance in 2014: the addition of a second singer, and, a much larger stage design. This includes a potential skateboard and video projections, created by Hannah Wasileski, to further highlight the volatility of online identity,

Performances take place on 8th and 9th August 2015 at Tête-à-Tête Opera Festival, King’s Place, London. Keep up to date with the project on the website, Facebook and Twitter. 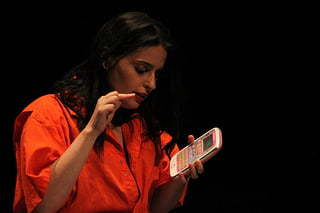