The 58-member board of directors voted in March to shut down, but recent campaign saved the troubled company.

Are opera singers now to be judged on their looks not their voice?

A storm of protest has erupted over critics’ disparaging comments about a Glyndebourne singer’s size and shape. If there is a line over which opera critics should not step, then it is into the realms of a singers’ personal appearance, writes mezzo soprano Jennifer Johnston.

A group of dogs were put through their paces at an audition for the Pittsburgh Symphony Orchestra, to determine which would take part in a performance of Leopold Mozart’s Hunt Symphony.

As it shuts its doors this weekend capital development director Emma King discusses the long-term vision for the Phil.

Phillip Sommerich reports from the final day of events at Classical:NEXT 2014. Appropriately, the final conference of Classical:NEXT was titled ‘Classical Music is Dead’, and speaker Brendan Walsh of consultancy Brending began in style.

World-renowned Finnish soprano Karita Mattila has publically refused to sing under the direction of Russian conductor Vladimir Gergiev, as tensions between Russia and the rest of the world manifested themselves at Carnegie Hall.

On Saturday, the Tribeca New Music Festival presented ‘Poetry in Motion:’ an evening of polished pop that featured the soprano Mellissa Hughes.

OAE ‏@theoae The OAE Hall of Shame. It’s time to unveil the TOP 10 MOST HATED PIECES OF CLASSICAL MUSIC as voted for by you. http://bit.ly/1lUH00B

The Journal of Music ‏@journalofmusic Arts Council to Invest €450,000 in Music Generation. http://ow.ly/x0TP2 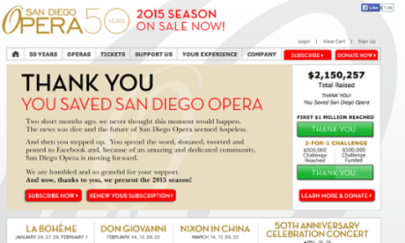