On Easter Saturday, WildKat PR visited Trinity Buoy Wharf  to witness the launch of the Listening Post, a mechanical music machine which plays notes determined by the Thames. The launch was accompanied by a performance of Floodtide, an algorithmic piece by  John Eacott which makes music from tidal water

Designed by sculptor Andrew Baldwin, the Listening Post is a permanent installation on the Thames Quayside at Trinity Buoy Wharf, which will play Floodtide through a mechanical organ. It was launched by a performance of Floodtide in Trinity Buoy Wharf’s adjacent Chainstore, with over 50 musicians from the Dulwich Folk Choir and Joji Hirota‘s Japanese Taiko Drummers.

The performance lasted about one and a half hours and spectators were invited to come and go during that time and explore other fascinating attractions at Trinity Buoy Wharf, including Longplayer, a Tibetan inspired composition which is designed to play without repetition for 1,000 years, installed in London’s only lighthouse.

The launch attracted a varied crowd of contemporary music connoisseurs and passers by who happened to come across the performance and were fascinated by the blend of Orkney folk songs from the Dulwich Folk choir and the stirring sounds of the Taiko drums, all directed by sensors in the Thames transformed into music projected on the Chainstore wall. 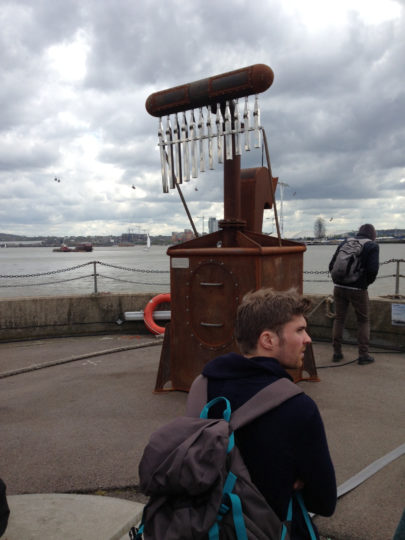