Tim Benjamin’s newest opera, Madame X, is a highly entertaining and theatrical opera. Whilst the face value of Madame X as a dark and shocking work is clear to see, the influences that have informed Benjamin’s opera come from all over the art world. 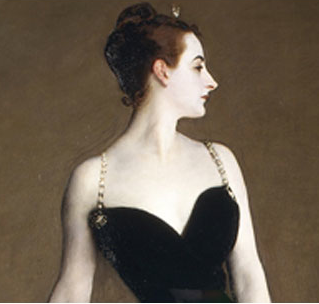 In terms of visual art alone, ‘Madame X’ is already infamous. When John Singer Sargent hung Madame X in his studio in Paris it caused a scandal despite the fact that many more obviously shocking paintings had already been exhibited. Singer’s Madame X still inspires works of arts today, such as Gioia Diliberto’s novel I Am Madame X. In Tim Benjamin’s Madame X, however, ‘Madame X’ is more difficult to identitfy, and, as Benjamin stated on Resonance FM’s Opera Hour, the question as to “who is Madame X?” is left very open. The opera Madame X instead makes a wider reference to art as an innocent force, fighting against a representation of corruption that is embodied by corrupt art dealers. Money is the devil in this opera, rather than one single figure, and Madame X is primarily concerned with the purity of art more generally. Madame X’s link with Jacobean revenge dramas also adds to the uncanny nature of the work; it is complete with ghostly encounters and other tragedies. Benjamin was also inspired by Mozart’s Don Giovanni, in which a villain meets his comeuppance, although the villains in Madame X again refer to the evil of money overall.

Musically speaking, Handel’s influence is perhaps the most obvious. Benjamin was obsessed with the Handel’s Water Music and the Music For the Royal Fireworks as a youngster, and Madame X is proof that paying homage to Handel’s Italianate operas is anything but outdated. A dependence on beautiful melodies can be seen in places, but so can complex music within the bass. This is particularly prominent in Masetto’s lament bass at the end of Act 2, one of the opera’s most engaging but melancholy moments in which Benjamin creates great empathy with Masetto’s character.  Madame X often makes Handellian and Purcellian references, and the baroque flute and harpsichord can be heard, but Madame X is clearly far more than a pastiche of any one composer or artist. Musically and visually rich, this is also an opera with strong religious undertones, as Masetto’s exclamations of despair often refer to a Christian God, “No! The End of God!” and there is something particularly other-wordly about Madame X from beginning to end.  There is clearly much to take from Madame X, a brilliantly dramatic opera that draws from some of the world’s greatest works of art across time.

The world premiere of Madame X will be performed in Todmorden in West Yorkshire on 21 August, before moving on to Halifax, London and Manchester. Tickets can be purchased from the Madame X website.