Dmitry Masleev won first price at the International Tchaikovsky Competition and became the centre of interest with rare unanimous support from the audience, the jury and the media. The Neue Musikzeitung reported:

“His musicality of metaphysical proportions transformed the hall. There was a feeling that we entered an alternative reality. This sensation continued into the final round with the Tchaikovsky B- minor and Prokofiev Third Piano concertos… The joy and relief on the faces of the jurors said it all: we have found the true winner.“

In addition to the gold medal, the distinguished jury of the Tchaikovsky Competition awarded him with a special prize for his interpretation of a Mozart concerto. Since the competition in 2015, Masleev has toured extensively, delighting his audiences in New York, London, Munich, Rotterdam, Stockholm, Beijing and all over Russia with what the Financial Times described as “virtuoso brilliance”. 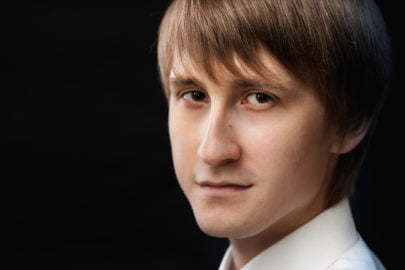 He was honoured to accept Maestro Gergiev’s invitation to play Mozart D-minor and Prokofiev Concerto No. 3 with the Mariinsky Orchestra in St. Petersburg during the holiday season.

Next season he will perform with the National Philharmonic of Russia and Maestro Spivakov and make his solo recital debut on the main stage of Carnegie Hall.

In the coming months Dmitry has a full schedule with confirmed recitals all over Germany:

Other international confirmed recitals will take place in Rome, Tokyo, Sao Paolo and Moscow. He will also collaborate with the Orchestra of Teatro Comunale di Bologna and the Borodin Quartet.

Dmity Masleev was born and raised in Ulan-Ude, a Siberian town between Lake Baikal and the Mongolian border. He was educated at the Moscow Conservatory (class of professor Mikhail Petukhov) and the International Music Academy at Lake Como. During his student years he won a number of international competitions, which led to invitations to tour all over Germany, Italy, France, Romania and Russia.

We are very much looking forward to supporting Dmitry Masleev throughout the new season. Keep checking the WildKat PR blog for updates.