Much has been made of the Mozart / Salieri rivalry, most famously in Milos Forman’s 1984 film Amadeus.

Last Friday, The Prague Post revealed that a long-lost collaboration between the composers has been discovered by the Czech Museum of Music in Prague. 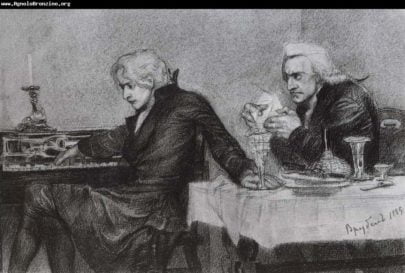 The most exciting moment is yet to come when later this week, the work will be presented to the media. Will it then be performed?

Most people have watched Amadeus, however, less widely circulated is Pushkin’s 1830 poetic drama, Mozart and Salieri, also based on the myth that Salieri murdered Mozart.

The drama mediates on the nature of creativity and illustrates the nature of genius and envy. Salieri is a man totally devoted to music, however, as he fully realises the extent of his rival, the ‘wunderkind’ Mozart’s genius as a composer, he begins to doubt his own talent. Much like in the film, Mozart has a cheerful, care-free disposition, whilst Salieri must take his work very seriously in order for it to be a success. Mozart’s God- given genius contrasts starkly with Salieri’s supposed mere human skill and endeavour; indeed ‘Amadeus’, Mozart’s middle name means ‘loved by God.’ Here, Salieri elucidates on his unbearable feelings of jealousy.

Who’d say that proud Salieri would in life
Be a repellent envier, a serpent
Trampled by people,
Gnawing sand and dust in impotence?
No one! And now — I’ll say it
I am an envier. I envy; sorely,
Profoundly now I envy. — Pray, o Heaven!

Salieri is infuriated by Mozart’s seemingly casual approach to his composition. When Mozart plays one of his new works for Salieri and then asks whether he thinks it’s any good, Salieri bursts out:

What profundity!
What symmetry and what audacity!
You, Mozart, are a god — and you don’t know it.
But I, I know. 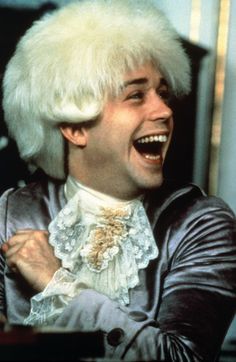 You can read the very short work here or watch it here.

It is widely understood that their rivalry is greatly exaggerated and the recent the discovery of a collaborative work between the two, makes the myth that Salieri murdered Mozart even more questionable. 200 years later, the story still isn’t over; what more might their joint venture reveal?