WildKat artist and composer Nimrod Borenstein is looking forward to an exciting and diverse concert season 2014/15. Having already had his compositions performed by the likes of Marie Cantagrill and The Philharmonia Orchestra, Nimrod’s reputation as a world class composer continues to flourish.

After commencing the concert season in September with a performance of “Poème” opus 64 for violin solo and string orchestra in France, October 2014 brings the exciting world premiere of “Breeze” opus 65 for wind quintet. The composition is due to be performed on 2 October by the highly accomplished Galliard Ensemble, for whom it has been specially written in celebration of their 20th anniversary.

Nimrod’s second world premiere of the season is due to be performed on 23 October. The exciting and alternative orchestra Camerata Alma Viva have commissioned Symphony for Strings opus 68 to be performed at St John’s Smith Square in London. The ethos of the orchestra differs substantially from the traditional orchestra: “It is a strong belief of the group that music is a very natural thing that anyone, trained or not, should be able to approach and enjoy. The Camerata Alma Viva is constantly working on breaking the barriers of the traditional concert, by playing the pieces in different settings, sometime playing from around, behind or even within the audience, singing or improvising during the concerts, encouraging spontaneous audiences reactions like clapping anytime they feel, creating original compositions to link different pieces together, adding poetry, light effects.” The unconventional manner of both composer and orchestra will make for an exciting and groundbreaking collaboration.

Winter brings more exciting collaborations, starting with English cellist Jonathan Bloxham who will perform the UK premiere of Cello Concerto opus 56b on 20 November 2014. Nimrod’s final concerts of 2014 are three separate performances of The Big Bang and Creation of the Universe opus 52 in Cyprus. Performing the composition is the Cyprus Symphony Orchestra under conductor Sivan Albo Ben-Hur, each on 3, 4 and 5 of December at various well renowned musical venues in Cyprus: the Markideion Theatre in Paphos, the Rialto Theatre in Limassol and the Pallas Theatre in Nicosia.

Finally, in what will be his first collaboration of 2015 Nimrod has composed a piece for the Gandini Juggling Company. The Juggling Company will perform the piece 4×4 which is to be accompanied by a world premiere of Nimrod’s Suspended Opus 69 and will take place in  the Linbury Studio  Theatre of the Royal Opera House as part of London’s International Mime Festival. The London International Mime Festival this year was described by the Londonist as a “true celebration of the unusual, the visual and the sublime” Plays to See described it as “London’s theatrical event of the year”. This festival is therefore an extremely prominent and exciting platform for Nimrod’s work and accommodates a fantastic collaboration between composer and theatrical company. The Trailer for the Gandini Juggling Company’s performance can be viewed here. 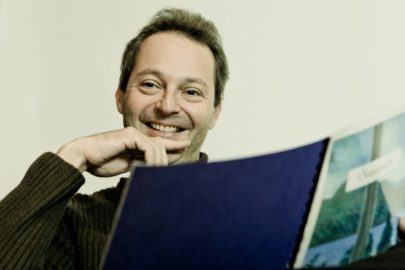