18th March: Radio 3 and the Pull Out All The Stops organ festival are both located at Southbank and colour-blind artist hears colour thanks to electronic chip

Southbank Centre is pulling out the stops for its organ festival

The Royal Festival Hall organ will sound its voice in public for the first time in almost ten years at the launch of the Pull Out All The Stops organ festival tomorrow.

What is Radio 3 doing in a glass box on the southbank?

Radio 3 has relocated to a new temporary studio – in London’s Southbank centre. The station‘s controller Roger Wright explains why.

An artist has implanted a chip into his skull allowing him to hear different shades of colour as sound vibrations.

Four graffitied images of the British composer have appeared in Malvern as an ‘anonymous gift’ to the community – but the artists have apologised for not seeking permission for the paintings.

A video in which a trombonist sneezes into his instrument during a quiet moment of a brass band concert has now racked up half a million views on YouTube.

War, peace and artists’ responses to them are the weighty themes behind the 2014 Edinburgh International Festival, Jonathan Mills has announced in his final year as the event’s director, for the centenary of the outbreak of the first world war. 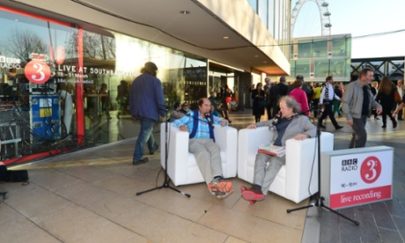