The Royal Welsh College of Music and Drama (RWCMD) has announced that the college’s patron, HRH The Prince of Wales will become its president starting in July.

HRH Prince of Wales will replace Lord Rowe-Beddoe, who after 15 years’ service, was the longest standing president for the college. Lord David Rowe-Beddoe will continue working with the college in the newly-created role of chairman laureate.

HRH Prince Charles became the college’s patron in 1999. To commemorate his 70th birthday last year, the college announced the renewal of the annual Prince of Wales Scholarships, which will be awarded from 2019 onwards in partnership with The Prince’s Trust.

The South Korean violinist receives NZ$40,000, a recording contract, a tour across New Zealand and Australia and a professional development programme. 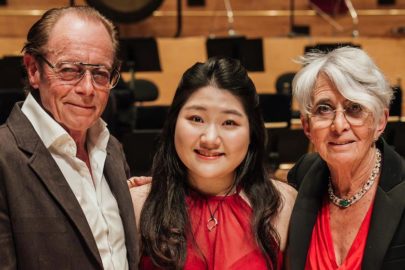 After a final round, in which three participants performed a concerto with the Auckland Philharmonia Orchestra conducted by Giordano Bellincampi, Do Gyung (Anna) Im was announced as the winner of the tenth Michael Hill International Violin Competition. The South Korean violinist receives NZ$40,000, a recording contract with the Atoll label, an intensive tour across New Zealand and Australia in 2020 and a personalised professional development programme.

Second Prize of $10,000 went to the American violinist Eric Tsai, as did the Chamber Music Prize of $2,000. Third prize of $5,000 was awarded to Jevgēnijs Čepoveckis from Latvia, who also won the Audience Prize and the inaugural Arancio Prize, which consists of a two-year loan of a 1645 Nicolò Amati violin, formerly played by Christian Ferras.

Ian Stoutzker has been awarded a knighthood for his lifelong commitment to the arts and music.

In 1977, he founded Live Music Now (LMN) together with Yehudi Menuhin. The charity is now a leading provider of interactive music programmes to people who rarely have access to live music, in places such as care homes and hospitals.

Live Music Now trains and supports young professional musicians to deliver its work based on the latest healthcare and educational research, playing an active role in their development as musicians.