Stolen ‘ex-Kym’ Stradivarius to be sold

The world-famous Stradivarius violin that was stolen from London’s Euston Station in 2010 and later recovered, will now be going on sale at auction on 18th December 2013.

The violin belonged to London-based violinist Min-Jin Kym, a celebrated international soloist and chamber musician and the story of the theft received worldwide attention and sympathy. After chasing leads across Europe, the instrument was recovered three years later by the police in the Midlands, astonishingly undamaged.

Though she has since acquired another Stradivarius violin Ms. Kym hopes the public sale of the violin will help close this chapter of her life; “This violin was a faithful friend for many years and I was devastated by its loss. Its recovery is an absolute relief and I am eager to hear the violin onstage once more and I wish its next owner all the best of luck and success.”

The ‘ex-Kym’ Stradivarius will be sold by Tarisio, the leading auction house for fine stringed instruments. “It is so exceptionally fortunate that Min-Jin’s violin was recovered safely and can now find its way into the hands of the next deserving owner,” says Jason Price, Director of Tarisio. “Min-Jin made a spectacular start to her career on this Stradivarius and we are certain the next owner will find similar success.”

Made in Cremona, Italy in 1696 by the Italian master Antonio Stradivarius, the ‘ex-Kym’ Stradivarius is one of an estimated 600 remaining instruments highly sought-after by performers and collectors. Stradivarius violins regularly sell for many millions of pounds; Tarisio set the current world record at public auction for a violin in 2011 with the sale of the ‘Lady Blunt’ Stradivarius for £9.8 million.

Launched in 1999, Tarisio combines the services of a traditional auction house with the efficiency and accessibility of online sales. Whilst Sotheby’s and Christie’s fine instrument departments have recently closed down, Tarisio has continued to expand, each year hosting nine auctions and continuing to set records in New York and London.

At the time of theft news reports valued the violin at £1.2 million. Online bidding for the auction will start at £1 million but the final price could fetch upwards of £2 million. A portion of the proceeds and sales commission will benefit the authorities who were instrumental in recovering the violin.

There will be a rare chance to see this celebrated Stradivarius on 27-28th October 2013 at the Westbury Hotel, Mayfair, where it will be shown as part of Tarisio’s London Public Viewing.
For any enquiries: 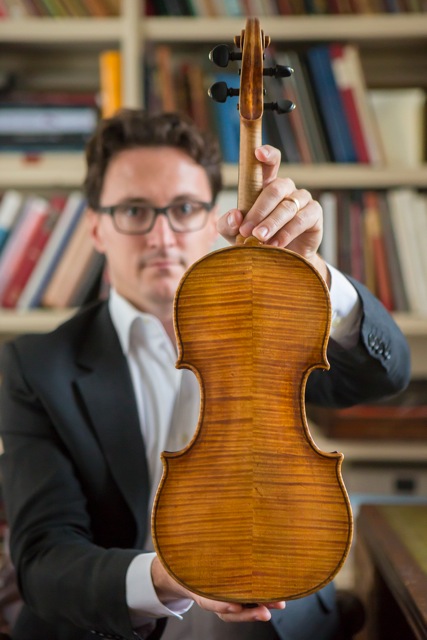