Okeanos to premiere Tokaido Road at the Cheltenham Music Festival

The premiere of Tokaido Road was announced by the Cheltenham Music Festival today.

Tokaido Road is a multi-media chamber opera commissioned by Okeanos, the UK’s unique Japanese-Western music ensemble. It takes its name from The Fifty-three Stations of the Tokaido, an iconic series of woodblock paintings by Japanese artist Andō Hiroshige. In 1832, Hiroshige famously travelled along the ‘Tokaido Road,’ which linked Edo (Tokyo) and Kyoto. Along the way, fifty-three stations provided weary travellers with a bed for the night, but famine and hardship existed in close proximity to these welcoming inns. In The Fifty-three Stations of the Tokaido, Hiroshige appears as a young man and in old age, reflecting not only on the changing landscape of Japan, but the people he met along his journey. He sketched everyone from samurai to starving peasants, geisha and a whole host of lively characters in intimate portraits.

Tokaido Road will premiere at the Cheltenham Music Festival on 6th July 2014. Tickets will be available from the festival’s website on 24th March. For more information and to keep up to date with the Tokaido Road journey, you can take a look at the Tokaido Road blog and follow Tokaido Road on facebook and twitter. 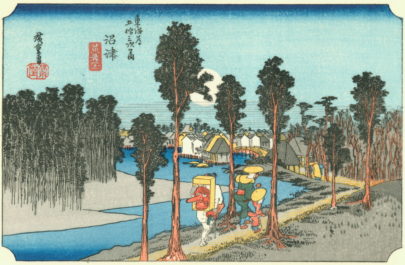 ‘Numazu’ from ‘The Fifty-three Stations of the Tokaido.’ Projections of Hiroshige’s woodblock paintings will feature in the opera.