On the 29th May, Minister of State Monika Grütters, Minister for Education Martina Münch and Vice president of the German UNESCO committee Prof. Christoph Wulf submitted a certificate for 34 different kinds of cultural heritage in Berlin. One of them is our beloved instrumental amateur music making! Prof. Christoph Wulf says that ‚immaterial cultural heritage shapes identities and encourages social cohesion as well as the dialogue between social groups. It is source of creativity and innovation and contributes to social change. I congratulate everyone who’s been awarded today kindly and thank you for your steady enhancements of our cultural heritage. You stand for the diversification of our cultural landscape.‘

Additional activities that made it onto the shortlist of the nationwide index include the telling of fairy tales, poetry slams in Germany and East Frisian tea culture.

In order to qualify for the index, the activity or tradition must be of remarkable social value to a larger group. In the case of amateur music making in Germany one could ask the questions ‘what is special about the scene?’ or ‘what is it being awarded for?’

An important fact is the rich diversity of the forms in which amateur music making occurs. Another one is the special cultural and social meaning it has for German people. 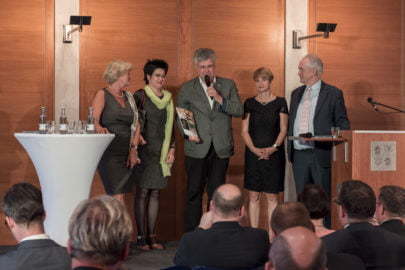 It is significant that the Bundestag published a paper with the topic ‚Amateur music making in Germany – survey and presentation of its social and economic role‘ (2008):

In 2007, the German centre for music information (Musikinformationszentrum) counted 29,500 amateur instrumental ensembles involving 739,500 citizens nationwide, 62% of who are aged under 25.

The instrumentalists form groups such as:

The reason amateur music ensembles retain a high status in society is the diversity of roles they provide people, enjoyment and the love for music assumed to be the most prominent ones. Other benefits include social connections, handing down traditions and values to younger generations and the preservation of cultural heritage, and a way of „linking cultural interest with the wish for commonality, communication and vitality“ (p. 5 Essay Deutscher Bundestag – Wissenschaftliche Dienste 2008)

One of the amateur scene’s hotspots is undoubtedly Berlin. The large number of amateur symphony orchestras is so significant that many performers and conductors lose track of them! It certainly doesn’t help that in many cases, the names of the orchestras are frustratingly similar. For example Symphonisches Orchester (Humboldt University), Neues Sinfonieorchester Berlin, Das Symphonieorchester, Berliner Symphoniker e. V. (professional!)

Here is a non-exhaustive list of the amateur orchestras of Berlin, though by now there are likely to be even more in existence. The variety of amateur orchestras lets interested people choose the right level of ensemble for them. There are orchestras that focus more on having fun and adopt a more relaxed approach to rehearsals, as well as orchestras with really high standards and as a consequence require a successful audition to join.

The nicest thing – not only in Berlin but in every city’s amateur music scene – is that after some time, wherever you participate in a new project, you will always meet people you’ve already played with in former projects. Due to shared interests and of course due to the power of music many of those people become your lifelong friends. The UNESCO committee certainly made the right choice awarding the amateur music scene for its many values and rich diversity!