The violin that was played as the Titanic sank in 1912 has gone on public display before it goes up for auction this weekend. The guide price for the violin is £300,000, making it the single most valuable piece of Titanic memorabilia.

A handwritten letter by Richard Wagner, dated 1881 to a Spanish newspaper editor, is due to be auctioned on October 24 at Barcelona auction house, La Suite. It includes a discussion of the character of Lohengrin.

Riccardo Chailly to be new music director of La Scala

Researchers at Cambridge University have identified five categories of taste over a lifetime and discovered that people are likely to disengage with certain genres as they grow older.

Near the end of the first work in an all-Beethoven recital in metro Miami, the 75-year-old Canadian began playing the same phrase over and over. Kuerti showed increasing disorientation and  eventually left the stage and was taken by ambulance to South Miami Hospital. It has not been confirmed whether this onstage neurological incident was a stroke.

The music PR agency will be working with Manners McDade’s entire roster of clients. 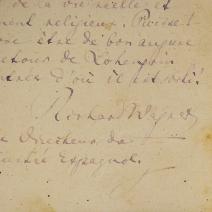