We are very pleased to be working alongside the Royal Over-Seas League on their 66th Annual Music Competition, which is taking place at Over-Seas House on Greek Park, London.

The AMC is the centrepiece of ROSL Arts’ year-round programme of music, art and literary events. Offering upwards of £75,000 in grants and awards, the AMC is widely-regarded in industry circles for its prestige and heritage. Recent winners of the Gold Medal include guitarist Sean Shibe, baritone Jonathan McGovern and saxophonist Huw Wiggin, each having gone on to achieve outstanding success in the early stages of their career.

Winners are offered life-changing performing opportunities after the competition, including bookings at the likes of Wigmore Hall and British music festivals. Past winners have benefited from concerts organised in countries including Singapore, Canada, Australia and Zimbabwe. 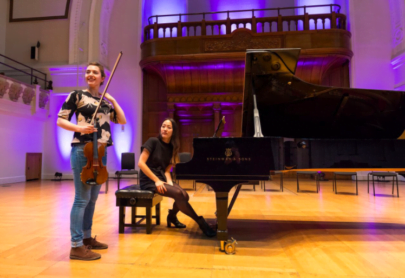 Founded in 1910 as the ‘Over-Seas Club’, ROSL aimed to unite a ‘far-flung brotherhood of individual men and women of diverse creed and races living widely apart under differing conditions, in different latitudes’ (Sir Evelyn Wrench). ROSL continues to champion international friendship and cultural understanding throughout the Commonwealth and beyond. A non-profit private members’ club, the Grade I listed clubhouse hosts regular music and arts events and offers under-35s a heavily discounted membership fee and networking opportunities.

A full list of section finals, and details of winners so far, is below:

The prestigious Gold Medal final, carrying an award of £15,000, will be held on 4 June at the newly reopened Queen Elizabeth Hall on the South Bank. Tickets can be purchased here.