The European Union Youth Orchestra is one of the world’s pre-eminent symphony orchestras. Described by the UK Guardian as having “gripping, exhilaratingly good orchestral playing, surging with energy, laser-sharp focus and collective daring… [and] a technical prowess that is downright terrifying”, it has provided an exceptional bridge between music colleges and the professional music world for generations of Europe’s finest musicians since its foundation in 1976. 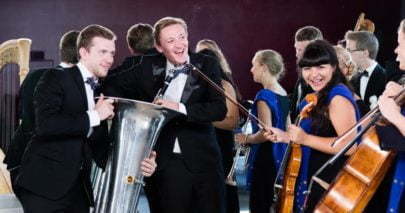 A truly global brand, the EUYO has performed in most of the world’s major concert halls, notably at the Royal Albert Hall, the Musikverein, Carnegie Hall and the Boston Symphony Hall.