WildKat PR is pleased to welcome Poppy Ackroyd and Carols Cipa to its client roster ahead of their highly anticipated album launches later this year.

Poppy Ackroyd’s Feathers will be released on the 17th November following her highly acclaimed debut album Escapement which was released in 2012.  Following a classical training, Poppy’s signature classically-inspired sound is a mixture of the melodic and percussive sounds created by both the piano and violin.  Escapement also incorporated sound recordings of birdsong and rainfall recorded throughout Scotland, where Poppy studied.  The album was heralded as “the soundtrack to your catharsis” by Sputnik Music and “an exhilarating venture into a dreamlike state of mind and music…” by Surviving the Golden Age.

Carlos Cipa currently studies at the University of Performing Arts in Munich.  His love for composers such as Satie, Debussy and Ravel coupled with an interest in indie rock music inspired him to start writing his own piano music which incorporates these two focuses.  His next album, All your life you walk, follows 2012’s The Monarch and The Viceroy and his acclaimed collaboration with composer Sophia Jani, Relive, released in January 2014.  His recent performance at Hamburg’s Dockville Festival was described as “a truly magical solo piano performance” by the Quietus.

Poppy and Carlos will tour together at the end of 2014, with dates at Bristol’s Cube Cinema (16th December), Nottingham Contemporary (17th December) and London’s Cafe Oto (20th December). 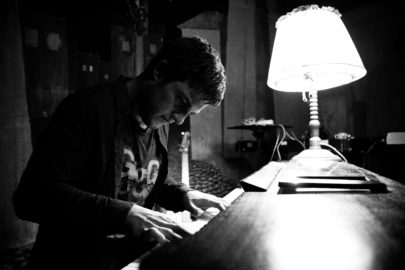