Since the 1980s, Williams’ monumental site-specific artworks have rolled over sweeping expanses of ranch land in California, and have floated on the moats of picturesque chateaux in France. From the Alps to Central Park, and from Los Angeles to Seattle, his head-turning, mesmerising works have captivated thousands.

Williams, who lives and works in New York City, holds a degree in architecture from the University of Michigan. Soon after graduation, his interests gravitated decidedly to fine art, and more definitively to site-specific, environmental art. His education, with its blend of architecture, art, engineering and urban planning, provided him with an intimate understanding of historical context, scale, and three dimensional space. It also gave him a firm grasp on the importance of relating to the unique aspects of a specific site and locale. All of these factors helped to propel him into the realm of large-scale environmental art, with a focus on both urban and rural locations. Williams has been an invited lecturer at numerous venues including the San Francisco Museum of Modern Art, the San Francisco Art Institute, and the University of California, Davis. 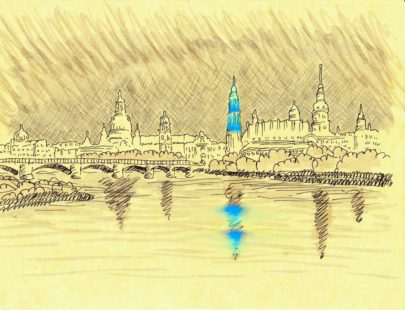 “Breath of Life/Dresden” as seen from the Marienbrücke on the River Elbe.
Artist’s sketch © Stuart Williams 2012

A new project, sponsored by the New York Foundation for the Arts, is now in planning for the City of Dresden, Germany. 2015 will mark the 70th anniversary of the firebombing of Dresden. In homage to Dresden’s survival and renewal, and to honour this important anniversary of an iconic moment in world history, Williams will install “Lebensatem/Dresden” (“Breath of Life/Dresden”) at the historic Dresden Cathedral in 2015. The artist will transform the facade with light… making the Cathedral appear to “breathe.” Waves of light, rising and falling at the pace of human breath, will create the visual impression of respiration. The Dresden Cathedral (Kathedrale Ss. Trinitatis) was completed in 1738, and is one of Dresden’s foremost historic landmarks. Along with the historic center of Dresden, it was destroyed in WWII, and meticulously rebuilt — stone by stone — in the 1980s. With its prominent setting on the River Elbe, it is a key component of Dresden’s historic “silhouette”, and with its soaring Baroque tower reflecting in the river, a light installation here becomes an artwork on the scale of the cityscape.

“The Kindness”, one out of 16 stone figurines on top of the Dresden townhall, looking down on the destroyed city after the bombing in February 1945

“Given Dresden’s nearly total destruction in February 1945, I think the vision of one of its greatest historic landmarks appearing to breathe will be extremely moving. As an artist, I see the project as a way of honouring the survival and renewal of one of Europe’s most beautiful cities. In the end, it becomes an affirmation of life itself.” — Stuart Williams

“Breath of Life/Dresden” as seen from the Carolabrücke on the Elbe.
Photo simulation © Stuart Williams 2012

A documentary film is being made of “Breath of Life/Dresden.” Stuart Williams is working with New York filmmaker, Christopher Burke and French cinematographer, Martial Barrault. The film will become the enduring record of this public art event.

THE NEW YORK FOUNDATION FOR THE ARTS (NYFA) is the fiscal sponsor of the “Breath of LIfe / Dresden”, which allows all contributions to be tax deductible to the full extent of the law, donate now.