Starting this Saturday and continuing throughout the month of November, Wimbledon will welcome world-class artists from around the globe to perform in various venues as part of the Wimbledon International Music Festival.

Now in its sixth year, the Festival has gone from strength to strength, programming unique concerts and performances from internationally renowned musicians and actors. Supported by Arts Council England, this is Wimbledon’s most creative and expansive year yet.

Wimbledon’s War and Peace theme is particularly unique. Haydn’s ‘Nelson’ Mass will feature in the opening concert given by The Academy Choir and Baroque Players, and The Katona Twins will perform their programme ‘For Whom the Bell Tolls’, interwoven with the prose and poetry of international writers, narrated by actor Henry Goodman. Prokofiev’s celebrated ‘War Sonata’ No. 7 will also feature in young pianist Denis Kozhukhin’s recital. The festival also offers ‘Peace’ with Mozart’s ‘Exsultate Jubilate’ and fun with ‘Death by Custard’, ballads performed by Musicians of the Globe.

The centre-piece of this year’s Festival will be an original production of Stravinsky’s dramatic masterpiece The Solider’s Tale – set as a computer game, with a parachute drop in, projections, and a smart phone used as never before. Fully costumed, with seven dancers and narrator it is supported musically by an extraordinary group of musicians. All musicians are Principals from major orchestras, aside from world renowned clarinettist Michael Collins, perhaps the finest clarinet player in the world. 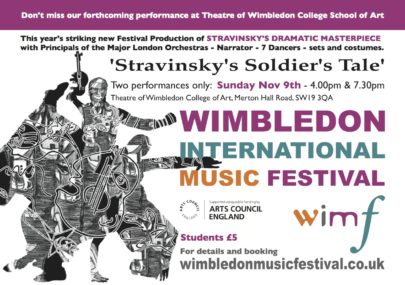